I took time out of my crazy busy schedule to watch the debates last nite. I wish I didn’t but I’m glad I did.  It’s time to face facts folks.  No politician gives a shite that you lost a loved one to cancer or that you yourself have it.  DC has a ‘deaf ears’ policy towards cancer even though it is the greatest global killer ever.
Check out this graphic 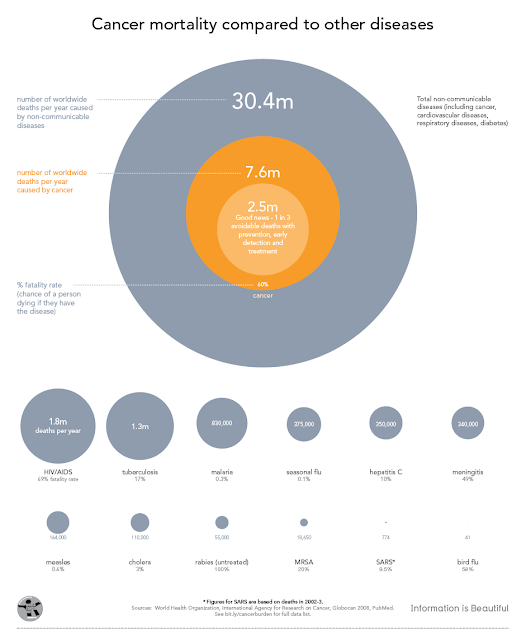 Every scientific and medical organization agrees that cancer is the deadliest and most pervasive pandemic afflicting not only adults but innocent children as well.  It no longer discriminates.
And yet as we bear witness to a cross species scourge that’s killing not only millions of people every year but millions of companion animals as well, what does our president do – a systematical and systemic reduction in funding for the National Cancer Institute.  I wrote previously about this and put forward the facts in my blog #NotMyPresidentDay
Now I’m not just Obama bashing since the past two administrations are guilty of hamstringing the NCI budget but the most egregious sin Obama committed was funding $ 6.2 billion in Ebola virus research – almost twice the budget of NCI for a disease that claimed only a few lives in the US.
Oh and nevermind that he gave out over $ 20 billion last year to ‘renewable energy’ concerns that failed so piss that money down the toilet.
——–
From all of the death and tragedy I’ve witnessed on my travels, I’m truly at a loss why cancer is not front and center in any and all national debate and discussion.
Yes I’ve heard all of the reasons and rationalizations but my conclusion comes down to this: cowardice and political expediency.
We used to be a nation of hope and resolve.  Of dreams and ideas.  It took us only 10 years to put a man on the moon defying all odds and previous scientific limitations.
But now we either relent because big pharma is making so much money from selling blockbuster cancer drugs and politicians are in their pocket or we’ve given up as a nation and accepted the inevitability of complacency.
There is no one in this world that has put their life and the lives of their dogs at risk for as long and far as I have for this cause but given the current political environment, every day I ask why?
We’re only a couple of fuzzybutts and yes, we’ve shown what two dogs can do for the world but it’s not enough.  It’s time to make cancer a national referendum or else..
#CancerWins2016