I went on a long hike yesterday in the back country at Beaver Creek State Park.  I had many encounters with aliens.

The most amazing encounter I had was with a leafhopper and an inchworm that both landed on my wrist. They seemed to be confused about the substance on which they landed, and they were equally vexed about each other.

The leafhopper soon grew tired of the scene and hopped onto more satisfying greenery, but the inchworm stayed for a bit longer. 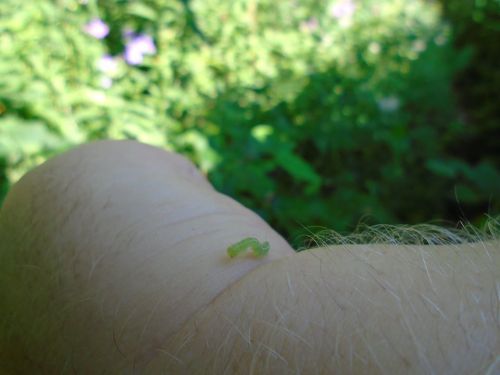 I let the inchworm loose a leaf of green foliage, and I continued on my way.

As I marched along, I came across several iridescent green damselflies.

They were quite hard to photograph. It was as if they saw my camera as a predator staring hard at them with one unblinking hard-staring eye.

Later on, I came across a scene of predation. Some ants had caught a hapless inchworm and were carrying it to their lair. 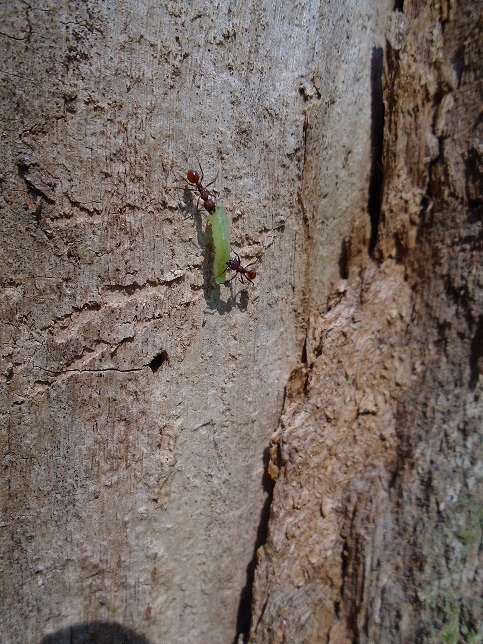 This is a world that is not mine. I am profoundly ignorant about entomology. I was into insects as a boy, but I grew out of that fascination.

My essential mammalness means that I feel a stronger comradeship with other vertebrates. Indeed, I feel that I can glimpse some knowledge the tetrapod world, but the insect and spider and crab world is beyond me– profoundly so.

No being on earth has a society as tightly organized as ants do. Not even our own species has a society that is so well-checked, but maybe someday we well will.

Their worlds are not ours, but theirs is more holistic, more complete. It exists without our profound intellect. It exists with their violence, their dramas, their instincts and drives.

It is beyond the reason of my supposedly reasoning species. It shall remain so, forever untouched.

Support my work here by becoming a Premium Member. For only $ 2.00 a month, you will get exclusive access to posts before anyone else sees them. Starting in August 2020, each Premium Member will receive two exclusive posts.  You will be the first to see to see them. So please consider a Premium Membership,if you want to help me produce quality content like this.