WW II veteran is reunited with his stolen dog

Are you in search of the perfect present for your pooch–or favorite pet lover? Here’s a rundown of some of our favorites for gift ideas–and the opportunity to WIN many of them in the giveaway…

PetsitUSA’s newest featured pet sitter is Cool Dogs Petsitting in Richmond, VA!  If you are in the Richmond area, you can find their listing here.

Cool Dogs offers many services, including:

Thank you Cool Dogs Petsitting for being a member of PetsitUSA!

We’d like to say THANK you with some special offers!

Before we all get caught up in the rush of Thanksgiving and the holiday season, I wanted to take a moment to say THANK YOU to each and every one of you. Whether you arrived at the start, over eight…

When Robbie and I first started dating, I had him over for dinner. This was actually very brave of me as I wasn’t exactly the most proficient chef at the time (and although I’ve very slowly learned to enjoy occasional cooking, I’m admittedly still not, at all). But I wanted to do it. To impress him, I whipped up a batch of one of the dishes at which I’ve always considered myself to be quite good – mashed potatoes. I really took my time with these babies too, adding the perfect amount of butter and garlic and young love, and watched eagerly as he took the first bite. His mouth formed a sort of forced smile as he grunted “mmmm” and slowly continued to take more tiny bites throughout the meal, until he was finally done. I was confused as to why (1) it took him so long to finish and (2) he didn’t pile on a heaping serving of seconds. These were my famous mashed potatoes, after all, and they were freaking dynamite. I knew something was up. Eventually I got it out of him – dude doesn’t like mashed potatoes. I know, I couldn’t believe it either. Talk about a red flag, man. Could I really date someone who didn’t like the most glorious food in all the land? Could I ever really trust him? Thankfully he had plenty of other redeeming qualities, but ten years later, I still give him a hard time about his distaste for the best food that ever there was.

Thanksgiving is exactly one week away, which, for us normal folks who actually appreciate their deliciousness, means (if we’re lucky) we’ll get to consume massive amounts of mashed potatoes. While my favorite type is the boring old traditional version (potatoes, garlic, milk, butter, and a little salt), I thought it would be fun to make a couple of unique varieties this year as well, and got to searching. I came across all sorts of ridiculously tasty looking recipes along the way, so it only made sense to share my favorites for this edition of 10 Great. I mean, how about #9? Mashed potatoes for breakfast? Yes, please! Or #7? Talk about comfort food. What if I just made an entire dinner out of just mashed potatoes – would that be weird?

I hope my fellow mashed potato lovers enjoy these recipes. If you have any others you can add to my collection, please leave them in the comments. And if you’re one of those weird people like my husband who doesn’t like mashed potatoes, just like with him, I’ll still love you. But if I ever meet you in person, just know I’m going to give you a hard time about it.

Poor doggie – trying to get that bone every single day. Until next time, Good day, and good dog!

Talk about being in the wrong place at the wrong time

November is #PetCancerAwareness Month.  Now I don’t know who made this month but for more than a few reasons, there’s a cosmic irony about it.  The first of which is Malcolm (the first dog I lost to cancer and whose death inspired our travels) – his birthday was the eve of.
It’s been many years since his loss and I don’t reflect on it oft but his light of life emanates from me still. And recently, it was all brought back.
I was grateful to be invited to participate at the Connecticut Shoreline Puppy Up Walk last Sunday October 30th and it was an absolutely gorgeous day – a bit balmy but cloudy at times.  Everything was going great though the proceedings seemed to be delayed until the news came down.  The Dog Cancer Hero, Medalla, whom we all had been awaiting her arrival, collapsed in the parking lot, was administered CPR by her vet, but tragically passed away en route to the clinic.
And everyone’s crying and the microphone was given to me to keep the proceedings ongoing.  Those of you who know me I’m not usually at a loss for words but I wept, too, and publicly something I hadn’t done so since Murphy.  After a moment of silence we all soldiered on and walked the two miles at Guilford Fairgrounds.  All of us except Medalla.
Perhaps that’s why I wept.  Some of us cross the finish line.  Some of us don’t.  And with Murphy it was close.
And while, at least for now, we don’t know why, we should all give thanks that we’re shadowcasted by the great brilliance of those we have lost.
This month, more so than others, give some goddamn great love to your companions, with whom your time together is transient but will walk aside you for thousands of miles until the end.
I want to thank MariAnne for sharing Medalla with us all and nearby is a bit about her in MariAnne’s words.
——–
Medalla was a mixed breed rescue from Puerto Rico. While I was there on business, we found each other on a secluded beach in the small town where I was staying.  She was just a puppy, between 3-4 months old.  From that day forward, she was the most loving and faithful friend I could ever hope for.  She never left my side. If you asked anyone at Guilford Vet Hospital, they would say she was a shy, quiet dog, but like most children, at home she was very talkative and the alpha of her pack.
At six years old, Medalla was diagnosed with Lymphoma. After Chemo, she immediately went into remission.  This summer, she came out of remission for the second time. This was her third round of treatments. She immediately went back into remission again.  She was such a little trouper and took everything so well.  Unfortunately, I lost her to a heart attack, before she could finish her Chemo.  I want to thank Guilford Vet Hospital and all canine cancer research for giving me an extra 3 years with my wonderful baby girl. 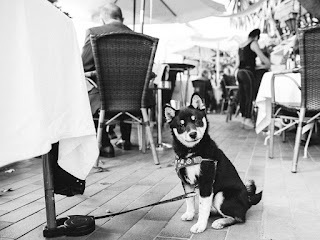