End of the line … 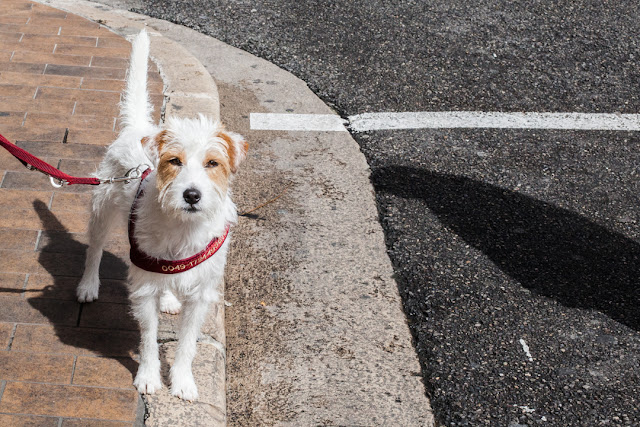 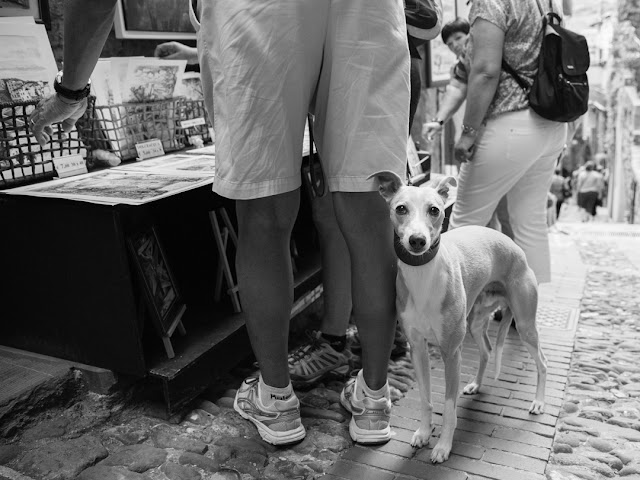 The dog’s owners are looking at art – but then so am I! Isn’t he beautiful!
RIVIERA DOGS 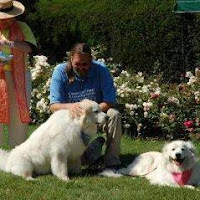 Six years ago this Sunday, Hudson, Murphy and I walked the final mile from Back Bay Fens to the Boston Common alongside hundreds of friends and hundreds of canine companions who traveled from 21 states to be there that day.
When I started out on the road from Austin, TX, I didn’t have much – just a couple hundred bucks in my pocket and a few friends helping me out.  The focus is so intense on each and every step and each and every mile it seemed unfathomable just how far and how long our journey would take us.  And we have gone far! And as we celebrate our sixth anniversary the Puppy Up Foundation has achieved so many incredible milestones.
Recently I traveled to Madison for their record breaking year, over 1,100 people, and over a $ 130,000 raised. It’s such an exciting energy to be a part of Team Madison and during a speech by our Scientific Chair, Kai Shiu, said how great it was to be a part of Puppy Up USA.  And I thought, ‘Wow, that’s neat.’
But then I thought ‘Our reach is international and all of us really are brought together by a common thread that spans border.’  In many ways I feel like we’re becoming an institution and that’s when it hit me.  We are a Puppy Up Nation!
I feel like that at every walk I’ve had the privilege to personally participate in.  I am often asked, ‘What are you most proud of?’  And my response has always been, to go from town to town and see how excited the communities are and successful they’ve been putting on walks – that makes me the proudest.’ 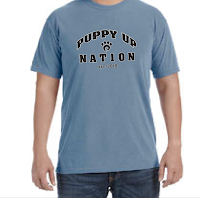 And that’s why I wanted to share this inspiration with a commemorative T-Shirt to celebrate our 6th anniversary.   And as a way to say thanks to everyone who has made this such a successful organization and as a reminder that we all are together in this and we stand in solidarity.  You can order a shirt here.
Thank you.  All of you for being a part of Puppy Up Nation!
Hudson, Indiana & Luke 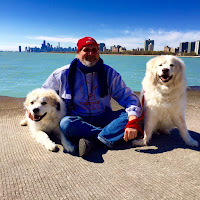 Any time someone from the Lower 48 goes to Alaska, the instant question that comes up on return is the traveler encountered a wolf.

The answer for me is simply no, and I knew fully well there were very low odds of me seeing a wolf. I live where there are tons of coyotes, and I see one about every six months. They are very good at keeping themselves hidden from people, and from what I’ve read about wild wolves, it is even more true about wolves.

Some members of my family went to the Kroschel Wildlife Center and saw a tame wolf named Isis. (I was told that she would not stop howling during their entire visit!).

My best chance at seeing a wild wolf was at Denali, but there is a catch to that story.

You’d think that place would be full of wolves, but it’s not.

In fact, a place that size really can’t hold as many wolves as it does wolf prey. Because wolves are top predators, they just can’t exist in such large numbers, and that fact is true regardless if you’re talking about wolves in Denali, cheetahs in Namibia, or lions in the Gir Forest.

So even in the best of times, there would always be just a few wolves roaming the park. They would be laid on pretty thinly on the land.

But these are not the best of times for wolves in Denali.

The traditional “buffers” that have been set up near the park that prevented legal wolf hunting and trapping near the park were lifted in 2010, and the wolf population went from 147 wolves in 2007 to 49 wolves in 2015.

49 wolves over a land the size of Massachusetts.

49 is still more than the number of wolves living in actual Massachusetts, which may be 0 wolves. It may not be, though. One was killed in Massachusetts in 2008, and one or two  could be lurking somewhere in the Berkshires, where they may mistaken for big coyotes.

But 49 is roughly a third of what the population was nearly a decade ago. My chances of seeing a wolf in Denali were 45 percent in 2010. They were 5 percent in 2015.

One of the best things I did at the park was take a hiking nature tour. My tour guide was very well-informed about wolf issues, and she told us about a wolf following one of her tour groups. There was no fear involved, but when someone in the party pointed out that a wolf was following them, she was certain it was a dog. She was very surprised to see that it was a wolf, and it was close.

The wolf ran off, of course.

But she also told the story of what happened to the East Fork wolf pack. This is the famous wolf pack that Adolph Murie studied. They were the wolves that were featured prominently in The Wolves of Mt. McKinley. This was the pack to which Wags, Murie’s tame wolf belonged.

Right now, the pack exists as only a single female. Her mate was killed on state land near the park entrance. She also had a litter, but I’ve not been able to find out what exactly happened to them. (I was there just a few days after this story came out on Alaska NPR).

I understand that Alaska has to balance interests between outfitters, who want predator control and liberal predator hunting allowances, and the desire of the American people to have relatively intact ecosystems in our national parks.

But it seems just a little perverse that we cannot maintain those buffers once again. I came thousands of miles to see wilderness where wolves might be.

I am okay with knowing they might be. I don’t have to see them. I just need to know they are there.

We had a small enough tour group that the guide and I got to talk about wolves a bit. She talked about her cocker spaniel and how that dog was far more rugged than she looked. The dog had been on many back country trips, and she wondered how closely related her spaniel was to those wolves.

But still far enough away. 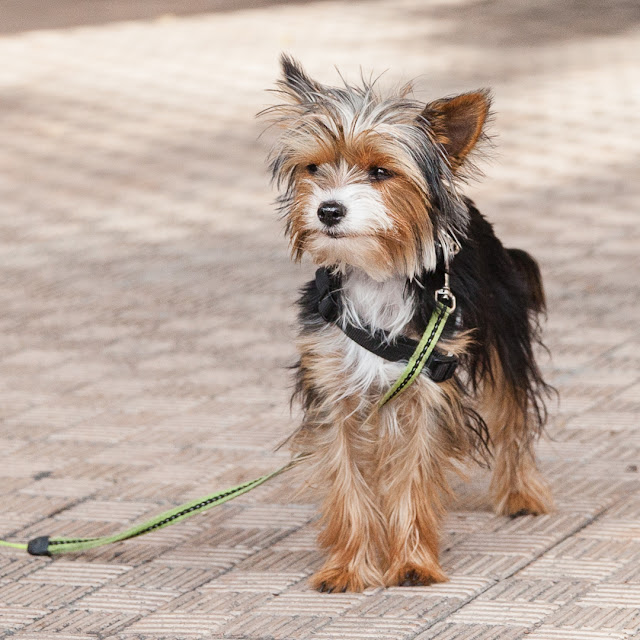 How cute is this Yorkie! And with such presence too …
RIVIERA DOGS

Does Anyone Know If Elon Musk Has Pets?

Hello! I would like to congratulate you on the roaring success of Tesla, in particular the Model X. I see them driving around when I’m out walking my dog and I spend a lot of time daydreaming about one day driving one of my own out to the dog park, with my dog’s one ear flapping in the breeze as we race down the road. Perhaps you might be saying to yourself, “Goodness! What’s keeping you from buying one, then? Aren’t you a veterinarian? I hear they’re rolling in dough!” Crazy, right? I hear that too. It’s a common misquote. What those people meant to say is, “Rolling in debt.” I do know one or two vets who are doing ok, but I think their spouses work in real estate, so there you go.

But we don’t mind, because we love animals. Day after day after day, people come to us for animal related goods and services and ask us, “Don’t you love animals? Because if you did, you would just give me this care for free.” And if we don’t, we are BAD BAD PEOPLE WHO HATE ANIMALS, and that sounds like an awful thing to be. Just check Yelp! You’ll see. At first, I thought that idea was hogwash, but after so many years of having it repeated to me I thought that maybe I just missed the part of civics lecture where they taught us that no exchange of cash for goods was necessary if the person who has the goods loves animals, because that is just what you’re supposed to do.

So the rule here is, if I really really really want something and you have it and you also love animals, you need to give it to me. I know it sounds nuts, but ten years of experience here can’t be wrong. It’s what the people expect.

Here’s the deal: my car just hit 150K this month and I’m hearing a weird clanking noise that makes me nervous. And yes, I could save up on my own or pick a car in my budget, blah blah blah, but clearly this whole Animal Lover Loophole thing is a widely used shortcut to free stuff, so I figured I would give it a shot before heading down to the used car dealership. I’ll even take the, uh, “cheaper” Model X 60D that just came out, I’m not picky.

I’d hate to see my sad, adorable, one eared dog stuck on the side of the road in this summer heat if I break down. We need reliable transportation befitting his status as Super Awesome Dog. Does Elon Musk like animals? I think we all know what the right thing to do here is.

I’ll be eagerly waiting your response.

For whatever cosmic reasons beyond my complete comprehension the Week of the 19th of June is what the Japanese call, “Mono no aware” – both beauty and pain, celebration and sadness…
It’s always the week of Father’s Day, the anniversary of the Final Mile in Boston, the passing of my boy Murphy, and the birth of Indiana Jones. It’s also the week of the summer solstice whose Latin translation roughly means the day the sun stands still.  When there is the least darkness.
Every year it’s a week I’d just like to fast forward through and move on because it can be too much for even me to shoulder.  And I’ve carried a ton of weight for some time.  But no one gets that option when you allow yourself to love absolutely. 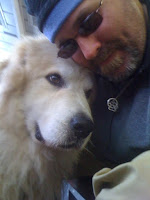 Five years ago today I gave Murphy rest and five years later I still weep inconsolably when I write about him.  His final days we spent together listening to Garth Brook’s song The Dance and he loved it before I even realized the significance of the lyrics.  Paraphrasing them, ‘I’m glad I didn’t know the way it all would end.  But even if I did, I wouldn’t have missed the dance.’
Just like every light begins with darkness the Week of the 19th is about the lessons from life’s inflections.  For me it’s been both a beginning and an ending and the promise and the pain of love as well.
And what a beautiful dance it’s been.  Happy 19th!

Why white sharks aren’t in aquariums

The yellow dog has become a ravening wolf

Nearly a year after her TTA, Miley is back in action. She’s 8 years old, but she runs and looks like she’s five.

In past week, she’s dispatched a full grown rabbit and this chipmunk.

Why dogs kick up grass and dirt after pooping or peeing