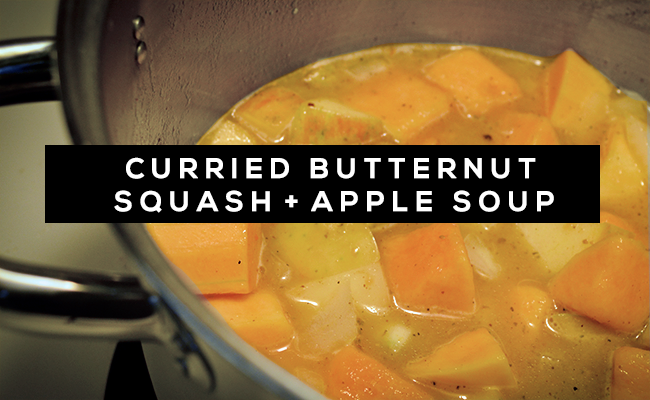 I love this soup because it embodies all the late fall/early winter flavors I crave – and it is super easy. It’s also another recipe that can be easily adapted to work for babies as well. 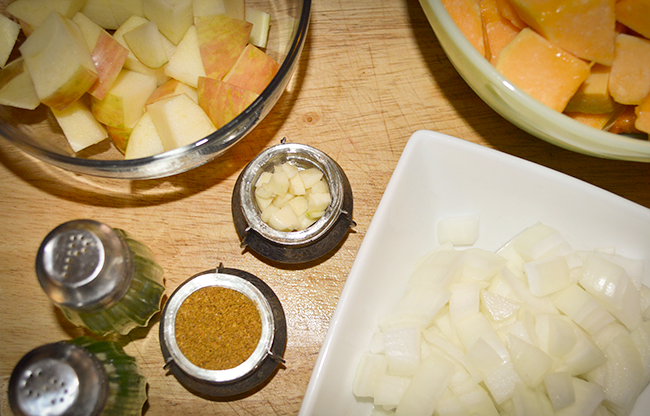 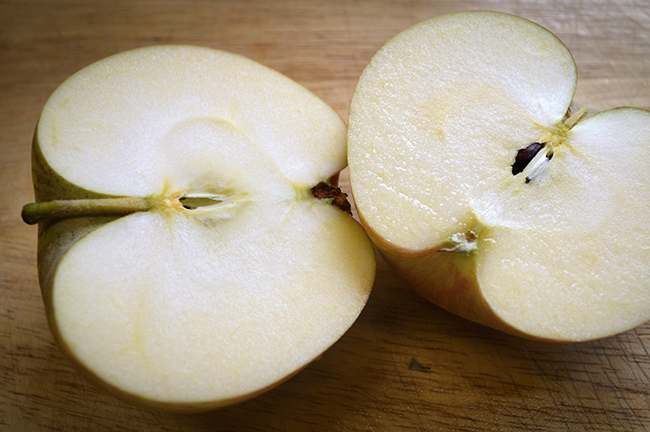 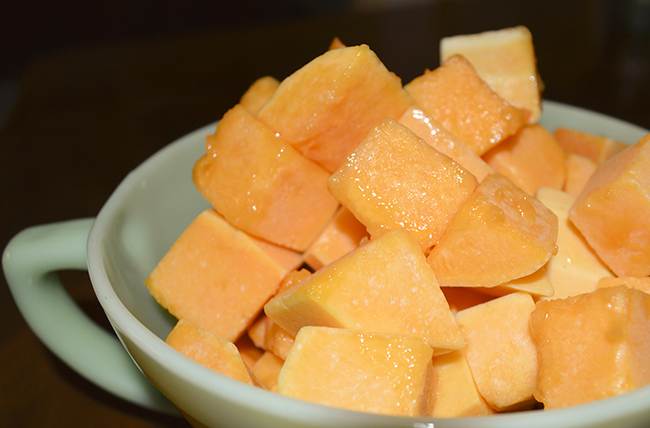 DIRECTIONS
Clean the squash and apple, then roughly chop. Chop the onion and garlic. Saute the apple and onion in a little butter until soft. While you saute, bring the water to boil, add the Better than Broth, and then add the cubed squash and curry powder. You’ll want to start with a 1/2 tablespoon of red curry powder if you are sensitive to the heat from curry. (I use a full tablespoon because my daughter Piper actually loves the intense spice!) Boil for 5 to 10 minutes, then reduce the heat and simmer on the stove top for 30 to 40 minutes. After the squash has softened and the flavors have had time to incorporate, you can remove from the heat and blend with a hand emulsifier or wait for it to cool a bit and put into a processor. 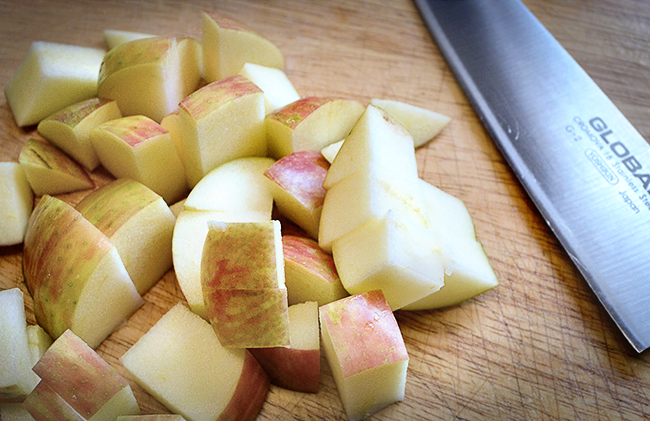 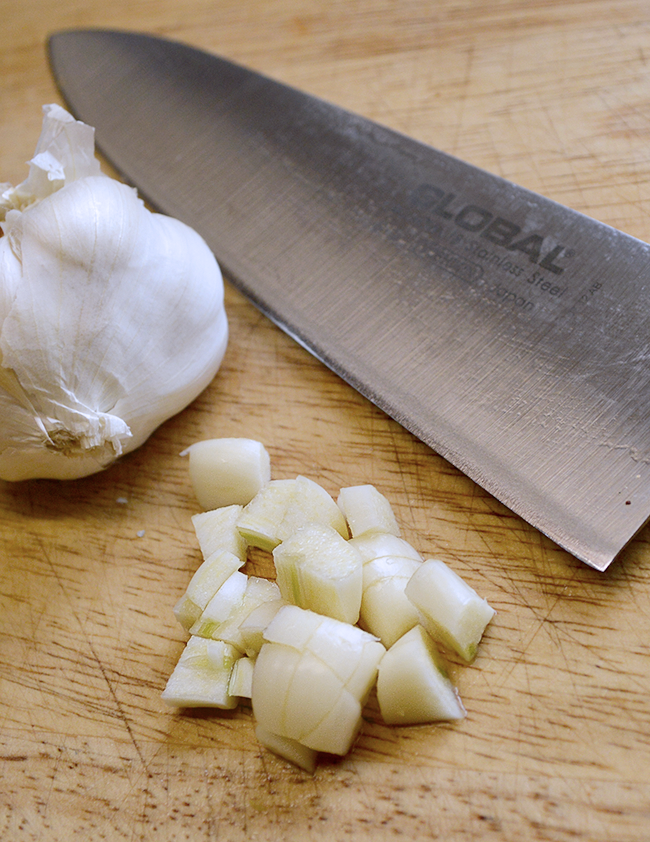 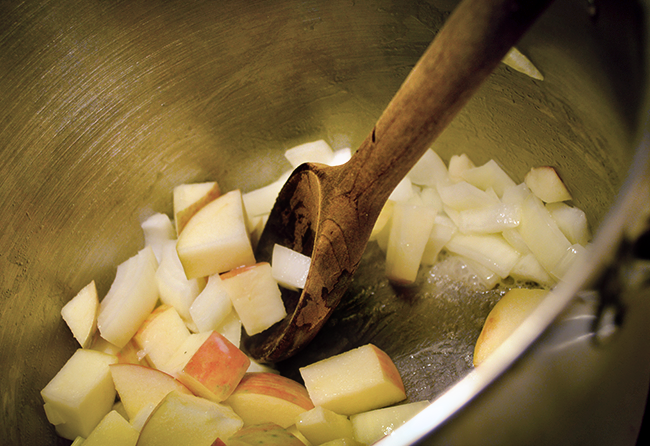 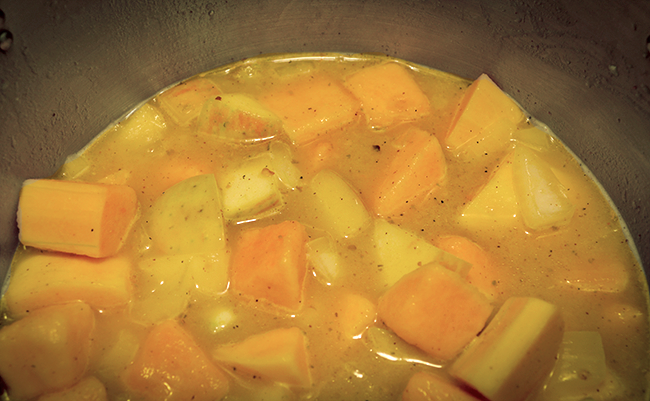 For adults, serve with a dollop of creme fraiche and a crusty roll. For baby, I simply stick this soup in her favorite sippy cup with a straw and she gulps it down with joy. It’s the best for warming your soul after a long day in the cold! -Sara

Big thanks to Sara for sharing yet another fantastic recipe that works for both adults and the little ones! I grabbed all of the ingredients to make this yesterday and can’t wait to try it out tonight. Sara is an event planner and “expert in indulgence” who has lived in the heart of Sonoma County California’s wine country for 12 years.  In addition to sharing her favorite foods and wines, recipes and more as our Food and Drink Contributor, she plans unique, personalized getaways to and events in wine country for her hospitality business, Wine Country Goodness, and travels the country in search of the best places to stay, explore, eat, and drink. You can also find Sara on her blog, Facebook, Instagram, Pinterest, and LinkedIn. Iris Grace, a remarkable, artistic, 5-year-old girl with autism has a special muse and best friend – her cat, Thula.

Thula joined the Carter-Johnson of southern England earlier this year and she and Iris became best friends.

Before Thula arrived, Iris’s mom, Arabella Carter-Johnson, had wanted to find a special pet for Iris but the little girl didn’t seem to have any interest in socializing with pets or people.

But, when the family had a feline guest they were caring for over the holidays, things changed. Iris was surprisingly drawn to the cat and Carter-Johnson knew there would be a kitty in her little girl’s future.

A celebrity chef with a hunger to help animals in need, Katie Lee– who recently tasted victory on the Food Network’s cuisine-themed competition, Chopped– has created a recipe for a…

My friend’s dog was having some skin allergy problems with her feet, so we fitted her with baby socks

The post Dog In Cute Baby Socks appeared first on A Place to Love Dogs.

A Place to Love Dogs

Hidden in the Stars by Robin Caroll (Book Review)

Hidden in the Stars by Robin Caroll My rating: 4 of 5 stars A suspenseful story centered on Olympic hopeful, Sophia Montgomery and Detective Julian, assigned to solve why she was attacked, “Hidden in the Stars” isn’t a gritty crime novel but rather a subtly loved story with a message of trusting God, no matter…

Naked Challenge! A Series of short video Challenging Professions fighting without any Armor/stats. Rangers rely on a keen eye, a steady hand, and the power o…

Save 20% on Kurgo Purchases!

The countdown is on to the holidays–and we’re definitely counting down to the last date for shipping in time for holiday delivery! Kurgo is offering a special 20% off sale with coupon…

Then there was that time at the bordello with Dr. Lorie

This has been an almost unbearably terrible week for those in the veterinary profession, and those who love animals. First the awful news that Dr. Sophia Yin had passed away, and then not one day later, we learned of the passing of another tremendous voice and educator, Dr. Lorie Huston. Like many of you I considered Dr. Huston a friend. She was extremely well regarded for her work online as the Voice of Pet Care with the Pet Healthcare Gazette, her many contributions to various publications, and most recently her position as president of the Cat Writer’s Association. But I think even more than her fantastic work, she was admired for her kindness.

Her gentle manner and empathy were unrivaled, and a shining example of the compassion that veterinarians so often extend to animals but sometimes struggle to extend to each other. She never had an unkind word for anyone. I don’t know how she did it. She made me want to be more like her.

As a denizen of the online community, I have nothing tangible to offer in condolences, no casseroles to deliver, no walls to place a white flower upon. All I have are words, those intangible, ethereal ideas that seem so unremarkable in the face of such sadness, and my attempt to express them in the hopes that in some small way they help someone else understand what Dr. Lorie was all about. And because I cannot bear to cry any more today, I want to instead share a story that will maybe make those of you who knew her smile a little through your tears.

A couple of years ago, the AVMA national convention was in San Diego. I touched base with Dr. Huston and learned she would be attending, and made plans to meet up with her at the Winn Feline Foundation booth, where Dr. Huston was sharing the work the foundation is doing to advance the health and well-being of cats. Dr. Huston had six cats, six well-loved, adored felines.

“Shall we go get dinner?” I asked, and she said she thought that would be a good idea. We walked a little bit through the Gaslamp district, and as I was starting to get tired I saw the name of a restaurant I had been to before and said, “How about the Marble Room? They’re great.” Lorie agreed.

I had been to the Marble Room with my husband shortly after it opened, a throwback steak house type place with amazing truffle fries. That was how I remembered it. No one told me they had changed ownership.

We sat outside since it was a pleasant evening, which in retrospect was an error since  had I gone in I would have seen the new theme: old timey bordello masquerading as a saloon. Within a minute, what I thought was a streetwalker but was instead an embarrassed-looking server in a too-tight corset and can-can skirt asked us what we would like to drink.

“Iced tea,” Lorie said with a pleasant smile, as I sat horrified. “Me too,” I squeaked out. “Are these uniforms new?”

The server nodded with a frown, trying not to catch the edge of the menus on her fishnets. A quick Google search would have helped immensely in this situation.

So Lorie and I shared a pleasant meal of not-quite-as good as I remember truffle fries while we talked about the role social media played in the evolution of veterinary medicine.

As always happened when we spoke, I was blown away by how sharp she was- never mind her calm and quiet demeanor, her brain was always churning away a million miles an hour about what the next big step was in improving the human-animal bond. Her greatest gift, as many of you know, was in explaining these complicated health concepts in concise and clear language. She made medicine accessible, and to those like me who knew medicine, she made social media accessible too.

Midway though dinner, she excused herself to find the ladies room. When she returned, she assured me that she located it just fine. When I followed suit a moment later, wedging between red leather banquettes towards the back, I saw that the hall leading to the ladies room was hard to miss as it was covered in, uh, tasteful I guess, nudes. I paused a moment to dab my forehead with cold water, mortified that I took poor, sweet Dr. Lorie to the world’s tackiest themed restaurant for subpar potatoes. When I returned, Lorie was talking to the server and quite kindly ignoring her attempts to hold her top up as she cleared the plates. “I am so sorry,” I said. “This is not the place I remember.”

“Oh no, it was delicious,” she said kindly, ignoring the rest of the situation. “The truffle fries were excellent. Thank you.”

And that was Dr. Lorie, always. Gracious to a fault. She was generous with her friendship, advice, and compliments, even when they were not deserved, even when her friend subjected her to an awkward, PG-13 rated evening out after a long day at the conference booth.

She will be missed.